Cas lives in the lovely county of Hampshire, southern UK, where she was born. On leaving school she trained for two years before qualifying as horse-riding instructor. During this time she also learned to carriage-drive. She spent thirteen years in the British Civil Service

before moving to Rome, Italy, where she and her husband, Dave, lived for three years. They enjoy returning whenever they can. Cas supports many animal charities and owns two rescue dogs. She has a large collection of cacti and loves gardening. She is also a folk singer/songwriter and is currently writing and recording nine folk-style songs to accompany each of her fantasy books. You can listen to and download all the songs from her website: www.caspeace.com

See the video of her performing live at the King’s Envoy book launch here: http://www.caspeace.com/cas-peace/the-wheel-will-turn 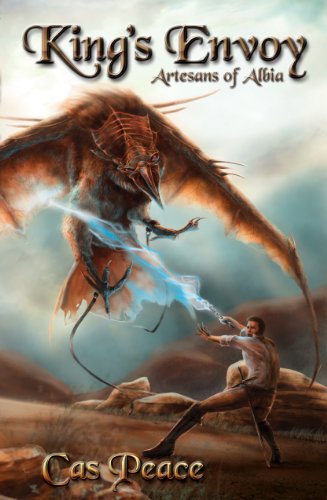 In Albia, the fourth realm, the precious Artesan gift is dying. Although born

to the craft, Taran is struggling to achieve his potential. Against his

friends’ advice, he embarks on a foolhardy plan to acquire the teaching he

craves. Alone, he crosses into Andaryon, the fifth realm, but instead of finding

a mentor, he stumbles upon a treacherous plot.

In the wake of Taran’s actions, Albia suffers a series of vicious raids. Major

Sullyan of the High King’s forces is sent to oppose them. But a dark and

Taran’s metasenses pricked him and he instantly woke, leaping to his feet and snatching his sword. He stopped short, biting back a curse, as he registered the confident stance of the young man standing before him. And he had every reason to be confident, Taran realized, with armed hunters at his back. His failure to sense them sooner made Taran scowl. Apprehensively, he waited for the man to speak.
“You’re trespassing, Albian.” The man’s arrogant manner and rich clothing confirmed Taran’s immediate suspicions—he was an Andaryan noble. Taran’s sleep-muddled mind struggled to frame a reply but he wasn’t given the leisure.
“The penalty for trespass is death.” Taran stared, knowing he was trapped. The huntsmen stood with bows unnocked but he knew how swiftly they could draw and shoot should he make a threatening move. And though the ugly giant birds they had were hooded and leashed, they could be loosed in an instant if he tried to run. His only chance lay in the bargain he hoped to make. He opened his mouth to answerbut was again interrupted.
“However, I came out this day for sport. What do you say to a duel, Albian, to determine your fate? If you win, you’re free to leave. If you lose, you submit to my will.” The noble’s pale, slit-pupiled  eyes were avid and he fingered the hilt of his sword as he spoke. The motion drew Taran’s gaze. Events were moving a little fast for him despite this seemingly favorable turn. He had not expected things to work out like this—according to his father’s notes, he should be the one making the challenge—but in the end, did it matter? And what choice did he have? The noble had him at a severe disadvantage and would be within his rights should he decide to kill Taran out of hand. Even if he wasn’t, there was nothing Taran could do about it. No one would protect him if he could not protect himself. He gathered his courage and faced the noble. He looked a little younger than Taran’s twenty-eight years but Taran had faith in his own skills. He was taller than the noble and he was agile and fit, there was no reason to believe he would not win. And the noble was an Artesan, Taran could sense it. He didn’t know what rank but that wasn’t immediately important. His father’s notes indicated that Taran only had to force a draw to win the right to the noble’s aid. If he turned out to be incapable of teaching Taran himself, his duty would require him to find someone who could.
“I accept,” he said, trying to keep the nervousness from his voice. The younger man grinned and Taran frowned. Those slit-pupiled eyes, unique to the Andaryan race, made his facial expressions unfamiliar. Taran would have to be very careful when reading his moves in the duel.