White Pawn is the first installment of the Vampire Court series while Black Pawn is the second installment! And guess what? They BOTH release TOMORROW, April 2nd! These aren’t full length novels, but instead are each more of a novella length. What I love about that is the next release, coming in May, is both White Rook and Black Rook – GUYS. That’s FOUR books in 2 months. Holy freaking amazing right? It helps that these are REALLY good too!

The world building here in this story is something I’ve come to expect and love from Ingrid Seymour. I absolutely love how real she makes it for me. It doesn’t feel..fake. It feels like this world that she’s created, is out there somewhere unknown to us all. Somewhere, hidden from us, these characters are truly living their lives; full of suffering, frustration and under the thumbs of horrific leaders. Don’t try and tell me that Acedrex isn’t a real world somewhere. I’ll fight you 😉

When we first meet Bianca, she is clearly a Lady and is all prim and proper. But she has a stubborn streak in her. She notices Nyro in the market and instead of letting things go and being that quiet proper Lady, she does the opposite haha. You get a look at the fire inside her right in the beginning; she’s a determined fighter. And after horrific events, she’s not going to just walk away from her life of luxury, she is quite literally going to RUN from it. You’ll see though what I’m talking about when you read it for yourself 😉

I highly recommend you guys picking both of these up and giving them a read because I think you’ll all enjoy them!

Now even though I’ve got both White Pawn and Black Pawn listed here, I’m not going to go into too much detail with Black Pawn, because it ends on a cliffhanger and I just can’t do spoilers. I don’t know I’d be able to truly do it justice without mentioning some things that might possibly spoil White Pawn for you – however! If you’re curious about my review for Black Pawn, you CAN find that one separately over on Goodreads and/or Amazon (after it’s released tomorrow, the review will be live on Amazon!) But I still have a few things to say about it, below! 🙂 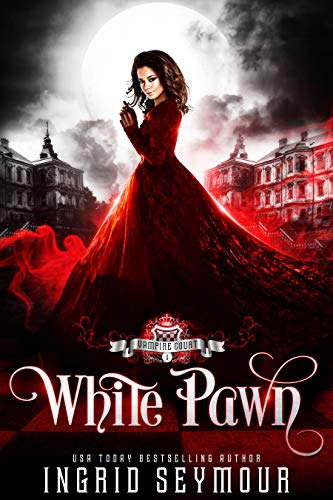 Bianca’s is a Trove. Her blood is so powerful it allows vampires to stroll in the sunlight.

She lives a socialite life of masquerades, governesses and flirting with eligible men like the handsome thief, Nyro Stonehelm, who openly defies the vampire King and Queen.

Soon a visit from the King brings Bianca face to face with a terrible reality—her father has gambled away everything, and still owes the King’s Court more. To set an example, the King executes her father. That one fateful morning, Bianca loses everything she ever knew.

With his last breath, her father confesses she’s a Trove and begs her to run. Instead, she swears revenge and joins the Queen’s Court, determined to destroy the King one day.

But how is a Trove to live amongst vampires without being discovered and made a blood slave? And how is her life linked to the handsome thief?

Not going to lie..I had a crush on Nyro the MOMENT I met him in White Pawn. IMMEDIATELY.

I love a man clouded in mystery 😉 There are things you don’t know when reading book 1 about Nyro, and I absolutely love that Black Pawn begins in the same time as White Pawn, except from another point of view.

Now don’t think that this is going to be just a retelling of the same story, because it absolutely is NOT. It is 100% different! This book is ALL about Nyro and his promise to protect his young brother. You learn about the sacrifices he made when he was just a child himself and how hard he’s worked to continue protecting his brother, Timotei.

This book DOES end on a cliffhanger, but guess what? You don’t have long to wait because the next release is going to bring us White Rook and Black Rook on May 2nd! So don’t fret my friends! Now go and read these books and thank me later! 😉 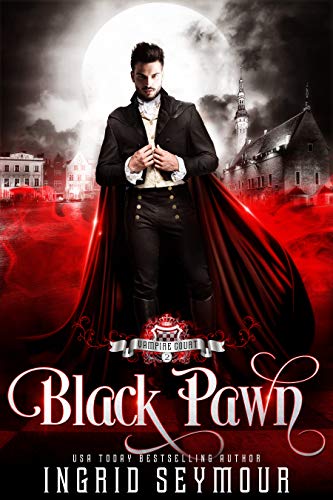 Nyro lives in Acedrex, a city ruled by two vampires: the White Queen and the Black King.

No one can leave or enter Acedrex and, for the majority of people, that is fine. It’s a safe place, far better than the outside world.

Unless you’re a Trove.

The curse runs in Nyro’s family. His father was a Trove and his willful eight-year-old brother, Timotei, is one too. Their blood can make a vampire powerful enough to walk in sunlight.

Nyro works hard to keep him safe. He promised his now-dead parents he wouldn’t let the vampires find him. But when Timotei is captured by a member of the Black Court, Nyro joins the King’s ranks in hopes of protecting his brother from within. There, he finds himself is a world of intrigue and machinations that promises to steal more than his family.

The King wants Nyro to be his Pawn and tries to take the last thing Nyro thought he might lose.

Ingrid Seymour is the author of Ignite The Shadows (Harper Voyager, April 23, 2015). When she’s not writing books, she spends her time working as a software engineer, cooking exotic recipes, hanging out with her family and working out. She writes young adult and new adult fiction in a variety of genres, including Sci-Fi, urban fantasy, romance, paranormal and horror.

Her favorite outings involve a trip to the library or bookstore where she immediately gravitates toward the YA section. She’s an avid reader and fangirl of many amazing books. She is a dreamer and a fighter who believes perseverance and hard work can make dreams come true.

She lives in Birmingham, AL with her husband, two kids and a cat named Mimi.