With the Magic by Donna K. Weaver – Book Blitz! 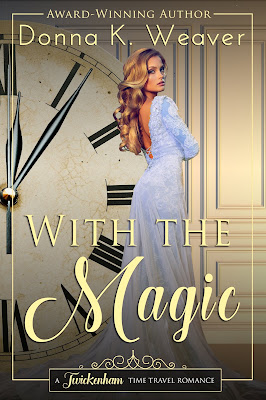 As the eighth earl of Kellworth, Gareth is accustomed to getting what he wants. Then he encounters a woman he suspects is from

the future–a utopian future that he feels compelled to see. He intends to get what he wants, but it will involve dealing with fae magic. And that could lead to disaster–for his heart.

Dr. Catherine Ryan is drawn to the handsome guest at Twickenham Manor, with his odd combination of childish excitement and old eyes that have seen too much pain. She loses her heart to him before she discovers the truth of when he’s from. Now she faces the biggest decision of her life!

Dead? The comment brought a macabre feel to the evening, and Catherine’s curiosity-itch flared. She peered at the stairs again with narrowed eyes; she had to investigate.

But, if Aunt Nellie were to discover Catherine up there, would she be banned from coming to Twickenham again? She reminded herself that “curiosity killed the cat.” In her mind, her grandmother’s voice finished the old adage, “But satisfaction brought him back.”

Still, Catherine needed to ask herself if the risk would be worth it. These balls had become the one bright spot in her life. If she were to lose them too . . .

Then the ever-present pull gave a stronger tug, the sense that there was something else going on and she must investigate. The American woman had said “they” were dead. Catherine was a doctor. Surely she had a responsibility to investigate.

Glancing to make sure she was alone, she picked up her skirts and began the climb. Winded by the time she reached the last landing before the fourth floor, she paused to catch her breath, vowing to start exercising regularly. Catherine had been blessed with a fast metabolism, so people were forever thinking she was fitter than she was.

She climbed the last flight. The hallway was unremarkable, lined with paintings. Listening for

the sounds of movement, she examined the portraits as she went down the hallway. She heard nothing, and she didn’t smell blood.

One door stood open, so she let the tug lead her inside. The long room held nothing but more paintings. How odd. There were a few chairs scattered around, but it didn’t look like it was meant to be a regular gathering place for people to sit together and talk.

Most of the pictures were busts of individuals, but in the center of the room hung a large painting of five people, three women and two men. Catherine blinked. It was the Americans, and their painted images wore the same clothing the five had on tonight. She shivered.

The young man she’d danced with hadn’t attended the Regency immersion vacation, having only arrived that day. When had someone had time to paint him? She’d also never heard that Twickenham had an artist on staff.

She studied the rest of the pictures in the room. Some were dressed in Regency clothing, but there were many others that spanned several eras. The one with the Americans was the only picture of such a large group. Whoever had arranged the paintings lacked any sense of design, leaving large sections of the walls empty.

That pull came again, as though Catherine had a string attached to her chest that drew her. This time it was to a portrait of a man placed to the right of the one with the Americans. Catherine came to stand before his painting, wondering who he was.

He appeared to be a little older than she was with a few silver strands at his temples. He also had what she’d call a regal bearing. She worked with enough surgeons and specialists who were used to being in charge, and this man had that look about him. He also wore an expression of someone with a fierce determination, the type of man people would steer clear of.

Catherine stepped closer to the painting. Behind the force of will that he projected, he had pain etched on his face. Her heart ached for him. What had happened to mark him that way?